Some sat glued to television screens, some climbed a hill to get away from it, some went to work as usual. I was free to take up an exciting photo opportunity offered by Shahbaz.
The opportunity was to attend the Royal Wedding Breakfast at St Andrews University with the privileges of “Press Photographer”. Not being one to turn down a chance of doing something different, I jumped at the chance and then thought on what it meant. Spare camera, lenses, batteries, memory cards etc. but more important a very early start.

To fulfil the task we had to be there by 7.30 am. That meant for myself living in Perth setting the alarm for 5.30am, and getting to Dundee for 6.45 to pick up Shahbaz and then on to St.Andrews. The first problem you have on arrival at St.Andrews is where to park! Luckily we found a free parking place 300 yards from the St.Salvators and the day was to begin.

Many of you will have seen the brief glimpses of the St Andrews part in the wedding broadcasts. Considering the amount of media present it was very little. The world’s press were there including the entourage of photographers, it was a great chance to watch professionals at work. Having spent my entire working life watching others at work it is by far the best way to learn.

Shahbaz set up his 5DMk2 to do a series of Time Lapse photography, which captured the essence of the movement and the excitement of the day, while I enjoyed capturing the atmosphere of the day. Those attending, some 2000 guests, had been asked to dress for a wedding and the images on the time lapse and the stills reflect this. It was very much a day for “reportage photography” and the atmosphere was such that everyone was willing to be photographed, whether posed or candidly.

Having had breakfast and enjoyed the entertainment put on by the organisers on the run up to the wedding service we settled down to watching the crowd watching the event on the big screen. A great opportunity for people shots. This is where the long lenses came into their own.

A great day out, 300 images later, tired and exhausted we got home in the early afternoon to sort out the spoils of the day.

Here is a selection of the shots I took. You can find Shahbaz’s images on his website: www.framefocuscapture.co.uk 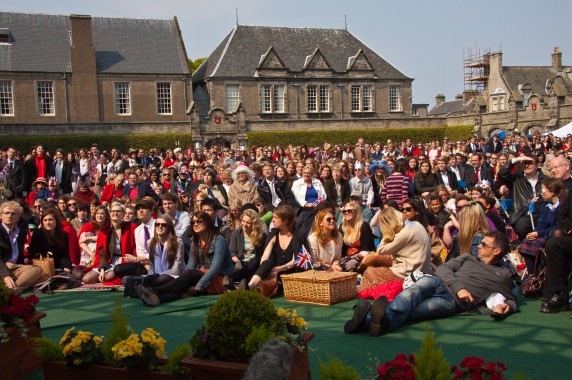